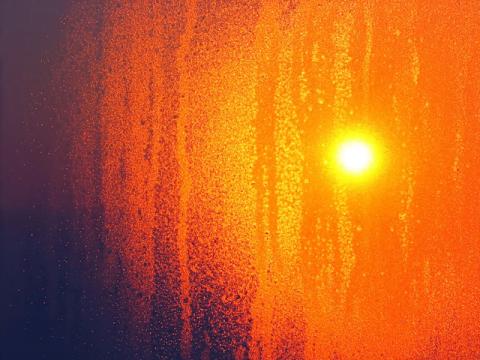 As for the sampling system, the sensor, and all its components in contact with the sample, must be heated to prevent condensation.

The analyzer must be heated to at least the highest flash point of all the solvents, with perhaps a 10°C margin, so that the solvent mixture produced in the heated process does not condense in the analyzer tubing and detector, causing a significant, possibly a complete, loss of reading.

In addition, the practical need to convey the sample in an undisturbed state from the process to the analyzer requires that the dew point of all substances in the heated process be examined. Most typical is the need to prevent the condensation of water vapor in processes where it exists at high dew points and elevated temperatures, so that the water vapor not condense in the analyzer tubing, clogging the sample flow paths and removing water-soluble solvents from the sample.

The solubility of certain solvents prevents the use of drying apparatus such as chillers for pre-conditioning the sample stream that is common in the measurement or oxygen and other non-condensing gases. The "dilution-probe" method—reducing the sample stream dew points and flash points to levels where they will not condense even in an relatively unheated sensor—brings with it the very likely possibility of errors due to uncontrolled dilution ratios which would directly corrupt the accuracy of the measurement.